Today has been AWESOME!!!  There were so many amazing moments that my mind is racing as I try to remember each moment.  It’s getting late and I have an early Uber to catch so I’ll try to focus on the highlights.

Last night we had a fundraising event for Children’s Miracle Network and today we were able to hear the total raised.  As an Express family we raised over $225,000!!!  How awesome is that???  I am so thankful for the incredible generosity of Express.

During one of the awards sessions today we had what I feel is the epitome of our awards – the Employee of the Year. This is offered up to the best associate placed of over 500,000 people over the previous year.  The top 4 candidates were all invited to the event and each was announced with a speech of all of the things they’ve done to help other associates as they were working so hard for us.  They then walked on stage to the thunderous applause of over 1,000 Express family members who were all giving a standing ovation.  Many were overcome with emotions and it was a truly beautiful moment.  A single winner was crowned and received a check for $5,000.

Later in the evening an anonymous donor matched the $5,000 award for ALL of the other candidates!!!  How fantastic is that?  Later in the event someone else donated another $500 to each of them!  It was AWESOME!!! 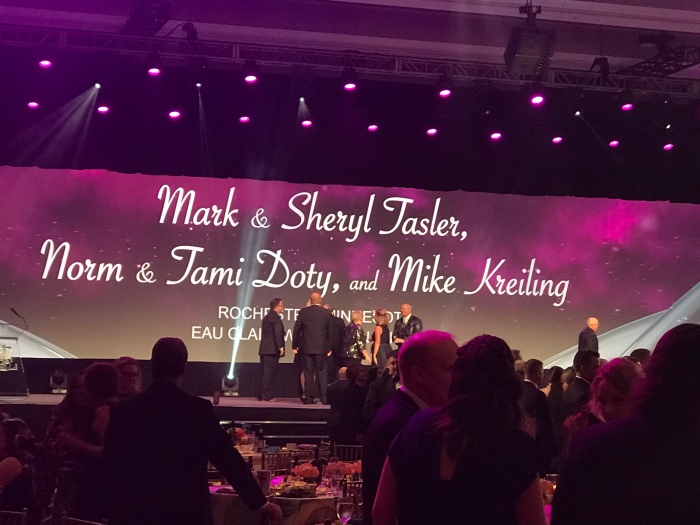 To cap off the evening there were more awards given and it was so cool to celebrate the successes of each other and to give many big hugs.  As we celebrated we all dared to dream bigger.  Many conversations were had focusing on new ideas, next steps, and how to add to all of the incredible successes from last year.

Last, it was a day filled with time with many of my Express family.  From the early morning to the late hours of tonight almost all of my time was spent with them and I’m thankful for every minute of it.  I’m so thankful to have each and every one of them in my life.

Thank you to everyone who had an awesome impact on me today, I appreciate each of you!