In between picking up and dropping off the boys for their various stuff tonight I had a Facebook Memory pop up that left me smiling.  Initially, I was a little sad, but then my feelings quickly went to joy.  Here’s the memory from two years ago (from before the blog!): 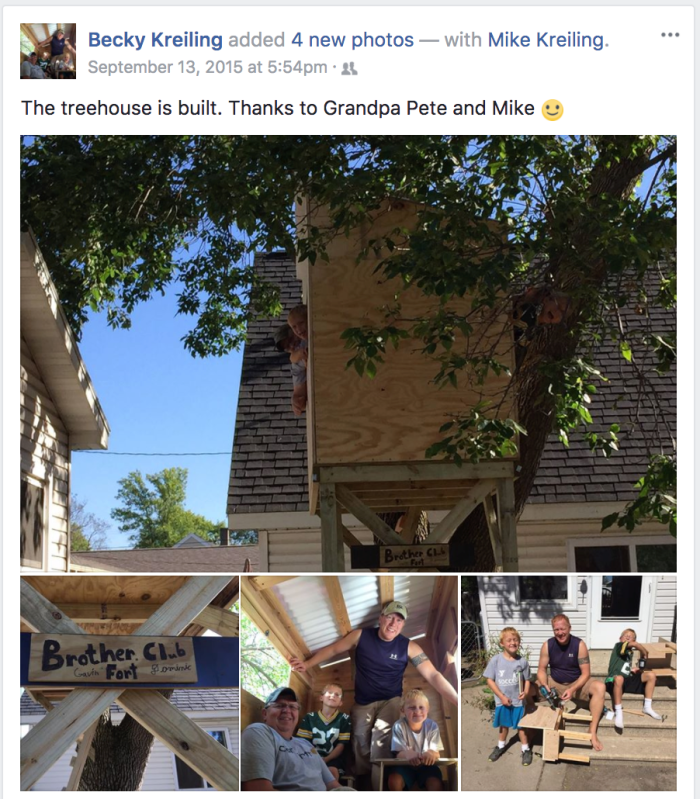 It was interesting as I initially talked about the idea with Dad.  Gavin had “Build a Treehouse” on his dream list and I wanted to help make that come true.  Dad was just about as giddy, if not more so, as Gavin was!

We all had so much fun working together to get it built.  Between giving each other a hard time, helping each other learn new construction skills, and just laughing as we spent time together it was pretty awesome.  The tree may have since been removed and a fourth leg and some paint added, but there’s not one time I’ve looked at that treehouse and not thought of Dad.

After seeing this I just kept smiling and thinking about some of the projects that we worked on over the years.  I had forgotten that this was before I started blogging and searched up old posts that contained “treehouse.”  When this one popped up I smiled even bigger and had more memories flooding back:  Day 61 – Thankful for Time in the Workshop with my Oldest Buddy

So many great times and memories with my dad, so many of them while were were building something.  As I said in that blog long before I had any idea he’d be gone, we weren’t just building things, we were building memories.

Today that memory popped up and I’m thankful for building the treehouse with Dad and my boys.  Not for the sake of the treehouse, but for the moments I’ll cherish forever.

Dude, I had so much fun building that treehouse with you!  You had so many great ideas and did a wonderful job of getting the boys involved.  While I wish we’d had more time for more projects I’m so very thankful for the ones that we did.  Love you and miss you tons!