I still remember my first actual bike. It was a red Murray BMX. More important than that detail was that it was one of my very first tastes of freedom. Crazy to think back that far, but I remember thinking I’d experienced true freedom and independence for the first time when I rode it. That bike was my opportunity to travel anywhere I wanted – so long as I got permission from my parents first. That bike and the ones that followed took me to so many places including to the end of the gravel road we lived on, to town (four-ish miles away), and even to the golf course. My bike was my key to going everywhere as a kid!

Fast forward a few decades and my bike has changed a few times. Whether it was my original Murray or the current iteration (Giant) it has remained the same and has retained the same name – “my bike.” Regardless of the brand, model, or style it has remained a faithful friend who has led me to many wonderful experiences. Case in point – today my bike took me to the wildlife preserve and helped us have a close encounter with a pair of cranes AND provided a little alone time with Dominic as we biked to see what his cousins were up to AND was a source of some serious namaste while I biked back to camp alone and with some great music playing. 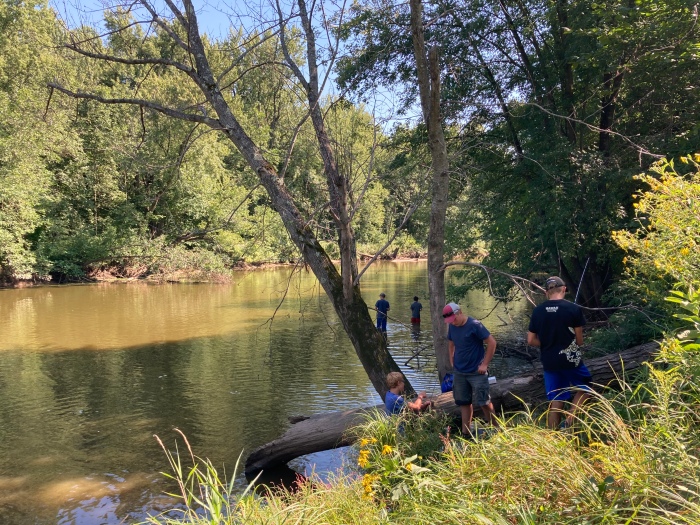 So many experiences related to my bike, so many moments of joy thanks in part to my bike. I swear, each time I get on my bike I somehow get significantly younger. I hop on and next thing I know I’m swerving on the road, going up and down hills, riding with no handlebars, and even occasionally “jumping” my bike when I go over a big bump (more like just lifting my front tire an inch or two off the ground, but who’s counting?). My bike is freedom. My bike is a source of great joy through experiences. My bike is a time machine that shaves decades off my being. My bike leads me to so many joyful moments. I’m thankful for my bike and the moments it has helped to create.

Today I’m also thankful for a very odd counterpoint to the first half of my blog. Interestingly enough the reason I am thankful for my bike in the first place was 100% due to a thought exercise I took myself through today.

When I headed to the shower near our campsite I parked my bike outside the door. Not thinking too much of it I hopped into the shower. While shampooing the remnants of a once great civilization – my hair – a thought occurred to me. My bike wasn’t locked up! It was just sitting outside where almost anyone could take it. While I hurriedly rushed through the rest of my shower I focused on finding a way to best utilize the stress of this situation.

“If my bike was stolen, how would I react? What would be the right way to react? What can I learn from this?”

My initial thoughts and emotions led to anger. How dare someone take my bike??? Who would do such a thing? What is wrong with them??? In an instant I realized that this was negative emotion that did nothing to fix the situation.

I then focused on how I would remedy the situation. What would the process be to try to re-obtain my two wheel chariot of freedom? I thought about who to contact, how much effort to put into finding it and so on.

After the practical I went back to my initial emotions and tried to focus them towards the positive instead. I thought about how I could forgive the person who stole it. I considered that there may be something profoundly wrong or sad in their life that caused them to see stealing the bike as the right option for them. If they already were struggling maybe this would be what got them the last they needed to get them on the right track or out of the trouble they were in. Maybe my bike would be going to someone who desperately needed that feeling of independence and freedom and would have a positive impact on someone’s life like it had mine.

The more I thought about forgiveness I realized it would be a unique opportunity to teach my boys about how to maintain emotional control and how to forgive. Of course I’d like to have my bike back but if I couldn’t do anything to get it back I could show my boys how to handle the situation with dignity, calmness, love, and forgiveness. It seems that much that is problematic in the world could be calmed by all of us learning or re-learning this skill set together. In taking my bike this person would have provided a unique opportunity to help me share a valuable life lesson with my boys.

While all of this was going on inside my head I hoped my bike was still there. In a crazy way I was prepared in the event it wouldn’t be. The entire process reminded me of a lesson from the Dalai Lama. He regularly imagines that his most prized possession, a vase, was already broken. In doing so he found that he had a renewed and deepened appreciation for the vase each day. Think about it, how much do we appreciate something or someone when they are gone? In that instant when we realize that we will not have any more time with them our appreciation for all the moments we had with them increases significantly. In an instant what we saw as an infinite source of joy is suddenly limited to what we’ve already had.

In thinking through this thought exercise of my bike being taken my depth of gratitude for my bike and all the experiences it has helped to create increased tremendously. It helped me prepare for the possibility of losing my bike, it reminded me to appreciate my bike, and it caused me to stop and remember all of the times and experiences I’ve had while on my bike. Long story short, in simulating profound loss I encountered profound joy and meaning. How wild is that?

Funny how life is often like that? The duplicity and friction between things often lead to the deepest understanding and joy if I remember to choose the right attitude.