When’s the last time someone was tailgating you as you drove? How close were they? Did they do the constant swerving to see if they could get around you only to angrily swerve back behind you and inch closer to your back bumper? How annoying, right? Who are these awful and horrible people who obviously didn’t have parents who loved them? How do these people even have a license?

Sadly, I know who those people are. I’ve been one. There’ve been more times than I care to mention when I’ve been “that guy.” Fortunately I’ve focused on not driving like that and am continuing to keep my Australian driver mindset of relaxing and getting there when I get there.

This morning as I headed up to Eau Claire I had a unique experience. I slowly caught up to an SUV that was obviously in a hurry but was stuck behind a semi truck. At first I paid no attention and hung a ways back. I quickly realized that there was something a little off. The car was about 15 feet behind the semi truck. 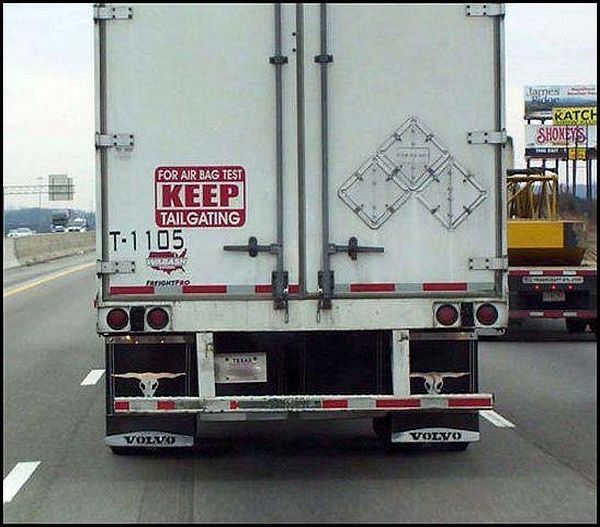 Over the next ten minutes or so I watched the tailgating dance continue. The driver of the car would slide into the other lane sharply, see the oncoming traffic and jerk the wheel to get back in behind the truck. They (I almost wrote the gender of the driver, but it doesn’t matter in the least – we’re all equally horrible drivers 😉) would then shrink the distance between their bumper and the back of the trailer to less than 10 feet.

As this continued I noticed something else. The truck driver went from going 55 to 45. I’ll never be certain, but I’m pretty sure that the trucker was getting frustrated at the person behind them and decided to teach them a little lesson.

As one could imagine this just further escalated the tension. The SUV driver was now bouncing in and out of their lane even more. It was ridiculous! At one point they finally found just enough room to get by and they were off.

I chilled and drove and thought. So many lessons in that brief quarter of an hour. Over the next 20 minutes or so I continued to unpack those thoughts and lessons. Here’s what I realized:

Isn’t it interesting how one can learn so many lessons from one interaction? I can guarantee that many of these thoughts will be going through my head when I catch up to a slow driver or have a vehicle tight on my tail. Take a deep breath. Remember to be safe. Assume the best of others. Don’t write a negative story. Stay calm. Slow down and enjoy the ride. Drive like an Australian.