When the boys and I were heading home from hunting I fired up a little Johnny Cash for the boys and somehow one of the songs really planted a seed in Gavin’s brain… a couple of nights ago he asked me to play that song out of the blue and he’s listened to it countless times, often while singing along to it. It cracks me up seeing him get so into a song I love, and just kind of crazy how much he likes it as it’s not his normal type of jam (he’s more of an Imagine Dragons kind of guy). I totally understand how he’s stuck on the song as I often fixate on one song for long periods of time too.

On Sunday night we headed out for Steve’s birthday to play some games and chill. The game we played is The Thing, the same game we played as a group a couple of months ago. Just like last time we had a blast and had to play it a couple of times. Earlier in the week I had the following birthday exchange on Facebook based on the game: 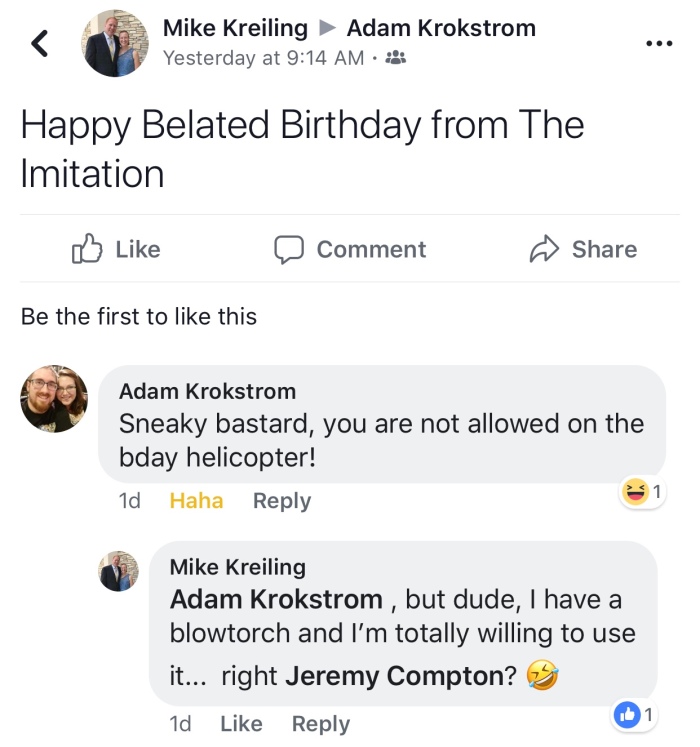 Tonight as Kathy was cutting my hair we were still laughing about the game and just how much fun it was. While there are many board games that I enjoy immensely this is one that I’ve created so many fun memories with.

Even when Jeremy tells the story of how he came across the game I can’t help but laugh out loud. He was at Jimmy Jam’s and was considering Pandemic, a cooperative game Until Jeremy explained we’re more of a cut throat kind of gaming buddies. The owner laughed and said that he totally had to get The Thing. Boy was he right! So much fun has been had with that game and it’s not even starting to get old yet.