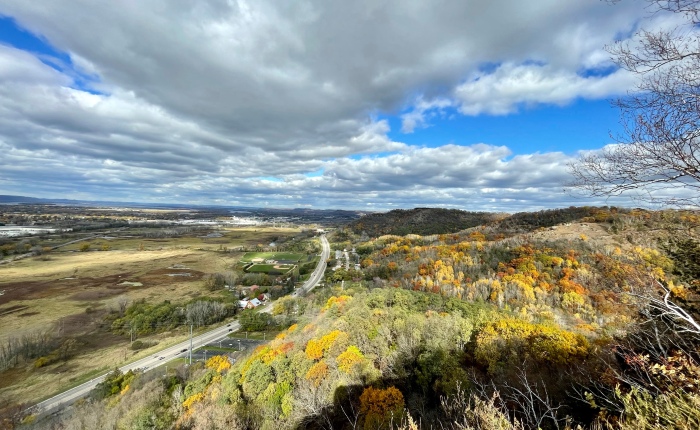 After church and lunch Becky and I headed out for a hike. The weather was perfect and we both felt compelled to get both fresh air and a little exercise. Becky had noticed that there was a new trail opening this past week in Hixon so that was our destination.

The trail itself was certainly brand new. They had just knocked it our not too long ago and the smell of soil was fresh in the air. The path itself was nice and soft as it hadn’t been packed down by many travelers yet. Most of the trails in that area have been traveled many times by us, it was awesome being in an area we were unfamiliar with. Each new twist and turn showed us sights we hadn’t seen before. The autumn colors were fantastic and the rock formations we had not seen prior were very interesting. All in all, it was great taking a new path.

As it worked its way up to the top we re-connected with a trail that leads to a scenic overlook. We’ve been up there before, but it was a long time ago. The views of La Crosse may be amongst the best from anywhere in the city. We were able to see the power plant in Genoa a little less than 20 miles away. All along the valley we saw the various colors of leaves in the trees. Throw in the perfectly picturesque clouds and it was nothing short of beautiful.

Ahh… time in nature. There’s not much else in life I’d rather be doing, especially with my family and friends.